Superheroes save the world, helicopter cops look for marijuana, and in the sausage they find meat - these and other interesting topics of the past week 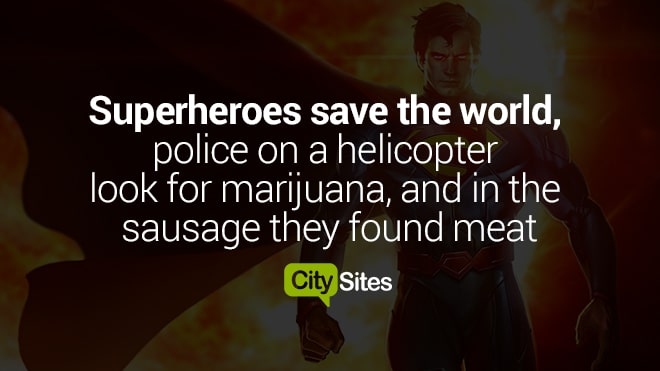 Headline - This is one of the main components of any article. If he is interesting - the chance that the reader will read the entire text is much higher than if the headline Articles will be boring and commonplace.

in the networks of urban sites CitySites, apparently, work the most Creative editors and journalists. We invite you to rate the 20 most curious and funny headlines over the past week.

Most of all, as always, the editors of the Odessa city website excelled.

This title immediately shows the dimensionless love and respect to officials of the Odessa city council.

Except Moreover, the site’s reporters subdivide officials into greedy, very greedy and probably super-greedy. This time unlucky very greedy to the official.

After reading the following heading, many applicants unanimously say: Of course, this is a smartphone! Or a miniature transmitter in the ear. But no, that's it It turned out to be much simpler. Journalists mean other things - school.

Girls of Odessa are not only beautiful and smart. Also they like to drink. Therefore, choosing a gift for a friend, don't forget about the bottle!

of Course, it's not what You think. We are talking about the SuperCool bottle water.

Odessa – the capital of humor. Here surprise headlines not only editors of the articles. Can surprise and entrepreneurs by the name of the shopping square.

In Odessa with humor and creativity all beautifully. But what is happening in other cities of the network CitySites?

You will not believe, but in Chernigov will soon have a large "turd"!

this city is not only architectural structures, things are fun, but with a modern sports competition.

Three quarters of the participants apparently did not represent the completeness of this event five drops. Have You ever skated down the street on office chair sober?

Mariupol - One of the cities of Ukraine, known today all over the world. Recently here they allowed to communicate with those in power. But by special rules.

in Mariupol mid-June was so hot that they refuse even minibuses work. They just drop into the nearest yard and have a rest sitting on a border.

Pavlopol - a small village that many residents left with the beginning military operations in the Donbass. But if people move from Pavlopol, then bees from Transcarpathia decided, on the contrary, to visit this place.

in For three years, Zaporizhia’s Lenin never had a new head. Upset officials decided that the monument without a head was not the same.

What the most important thing in police work? Of course, to detect illicit crops marijuana. This became even a helicopter! I wonder what the crew are lucky enough to patrol the area from above?

do You believe in superheroes? How not? And because they exist! And one – in the Ukrainian city of Dnepr, and the second – in Kazakhstan!

Almaty "spider-man" told me about yourself


In the Belarusian city of Gomel, too, is a superhero! He could not stop a few robbers of the pawn shop, and the whole highway!

In Russian Tver either very hot, or in banks can take the last shirt. But this man knows that in this facility it is better to go naked.

Experts checked the sausage in Tver for the content of unacceptable ingredients. AND What do you think? Found one such ingredient! It turned out to be meat!

While Ilon Mask is constructing another rocket, a UFO flies over Tambov again.

in What animals walk in the streets of your city? Cats and dogs? But in the Russian city of Naberezhnye Chelny on the weekend rested completely different animals.

Bishkek - the capital of Kyrgyzstan. Here they prefer lamb to other meat. But who would would have thought that the head of a ram could be used for these purposes too?

How a lot of interesting things, judging by the headings of the articles mentioned above, happening in our world! Moose are walking around the city, UFOs are flying in the sky, and tired minibuses rest in the yards! Be always positive. Read the news on the website of your city. Or send them to the editors site. Who knows, maybe in the next TOP of headers there will be an item your creativity.

Read also: "Curiosities and interesting facts from the world of business".